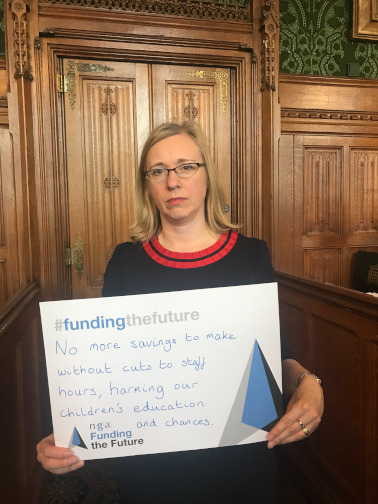 Jenny Wilkinson, spokesperson for Sutton Coldfield Lib Dems, has thrown her support behind a campaign by the National Governance Association (“NGA”) for a substantial increase to funding for our schools. In her capacity as Chair of Governors of Holland House Infant School and Nursery, Jenny joined governors and trustees from 130 constituencies across the country at NGA’s lobby of Parliament on Thursday 28th February.

Speaking about the event, she said, “I was shocked to hear about the wide-spread issues faced by schools as a result of school funding pressures. As we are finding at Holland House, schools have been implementing cut backs and savings for several years and it has now reached a point where there are no further efficiencies to be made. While funding per pupil is decreasing, costs are rapidly going up, with significant increases to pension costs and the introduction of the apprentice levy, as well as schools having to buy in services which were previously provided by the local authority. For many schools the only remaining way forward is to look at staff cuts or shortening the school week, with a number of schools now closing on a Friday afternoon. Cuts are particularly impacting on the most vulnerable children with additional needs. Our children only have one chance at an education and their opportunities are being irrevocably damaged.”

Governing boards are responsible for the financial oversight of their school, which includes deciding how the budget is spent. Governors and trustees are increasingly reporting the damaging decisions that they have to make in order to balance their school’s budget including cutting the number of teaching and support staff, reducing the curriculum offer, shortening the school week and not spending money on essential repairs to school buildings. Over three-quarters of respondents to NGA’s 2018 school governance survey said that they cannot manage the funding pressures they face without adversely impacting the quality of education they provide to pupils.

With a comprehensive spending review due later in 2019, NGA has set out nine asks for the government to meet in order to properly fund schools: these would require the government to increase education spending by a minimum of £3.5 billion per year. [2]

Emma Knights, chief executive of the NGA, said: “Governors and trustees are committed to giving pupils in their school the best possible educational experience, but instead of deciding how they can best invest in children, they are having to decide what to take away from them. Each school has a unique experience of the effects of funding pressures but what unites governors and trustees is immediate and long-term concerns about the damage being caused to education at a time when there are more pupils than ever and when more and more is being asked of schools, including to care for a growing number of children with high-needs. Increased school funding at all stages of education from early years to 16-19 is essential, not an optional extra, and a failure to invest in children and young people now is a failure by the government to give the next generation the education and opportunities that they deserve.”

Jenny Wilkinson has also met with Andrew Mitchell MP to explain the direct impact on-going funding constraints are having on staff and pupils at Holland House, which are mirrored in schools across the area.  She commented “I was pleased to have the opportunity to share with Mr Mitchell the issues our school is facing as we struggle to balance the books and the very real impact this will have on our children’s education if this perilous situation is allowed to continue.”  She urges other local schools to also share their stories.

[2] NGA has put together nine ‘asks’ for the spending review, based on the latest research and intelligence collected from governors and trustees. These are: